While it’s easy to think of Flash as being a mainstay of the consumer internet era, the reality is that it was the equivalent of a Spray Paint Gun, in the hands of an artist, it was and can be art – bringing complexity and depth to a 1-dimensional webpage. However, the reality is that for 99.99 of people using Flash, it’s the equivalent of a can of Krylon and your city wall – just a random series of stuff on a wall intended as art but never getting there and ultimately, more of a nuisance and a crime on your bandwidth and patience.

You can’t win a web design award without using Flash so of course, every designer interested in those accolades (after sending in $79.99 as an entry fee) is going to insist on it. Again, there are many instances where it is absolutely a great tool and it’s put to good use – however, most often, it’s simply a nicer version of the flashing GIF.

It was not until YouTube popularized it as a video delivery framework that it actually become something more than just er, “flash-y.” It was ubiquitous and even with the greater bandwidth available played to a strength of allowing faster streaming – part of that was due to its compression but most people were willing to trade video quality for video delivery speed and in this case, Flash is great.

But of course, like all good things, this too shall pass. Adobe wanted much more from Flash. In fact, the only reason they bought Macromedia was to get Flash. They admitted they tried to create a Flash-like environment but couldn’t figure out so they did the next best thing (yea, shocker, Adobe couldn’t create software and had to go outside to buy it).

But Adobe has proven over the past 20 years is that as a software company, they are pretty slow on the schnide and frankly has managed to tick off Apple, Microsoft and consumers – anyone else left? That’s not an easy accomplishment to get both Microsoft AND Apple mad at you enough to try and crush you.

Their feud with Apple is an oddball one considering that without Apple, Aldus PageMaker (that they bought) and Photoshop (also bought), and later the Laser Printer (Postscript developed by Adobe founder at Xerox PARC), where exactly would Adobe be? But somewhere along the line in the 1990’s, there was a tussle over display technology – I’m not going to bore you with the details – but when Apple chose their own versus Adobe Display Postscript, they got all huffy and then when the Mac didn’t grow as fast as the Windows side, Adobe did their best to kill the Mac by slowing down the release of most their apps … or perhaps it was laziness, cheapness or incompetence … you can decide 🙂

In the past 10 years, when Apple made major OS transitions – from OS6 to OS7, from OS9 to OSX and from PowerPC chips to Intel, Adobe is ALWAYS late to the show – sometimes by 18 MONTHS. Yea, not much happens in the software market these days in 18 months, why hurry, why spend money? “Maybe this will be the final straw that kills the Mac and we can save money to develop on one platform?” But yet, the Mac and its creative professionals stubbornly insist on buying much more Adobe products percentage wise than Windows users … all you have to do is look at Apple releasing APERTURE for pro photographers who were tired of the scant tools for working with RAW files, lo & behold, 6 months later, ADOBE pulls LIGHTROOM out of some deep recess and yet it took 14 months to upgrade Photoshop.

Video editors know that PREMIERE on the Mac basically had no upgrades for 5-6 years and ultimately was not just dead dog slow but dead-dog buried in a time capsule and covered in cement slow, in fact, the original programmer wanted to re-write it to take advantage of the “slight” computing increases from the past 6 years but Adobe didn’t want to spend the money so they gave it back to him and he sold it to Apple – a little something called iMovie.

Sure, the Mac was not exactly a growth industry in the late 1990’s – you can understand them getting cozy with MS and sure, MS as a partner is like reaching into a 30-foot python to pull out an capybara but to go out of your way to feud with them – over PDF?

And then to complete the troika, why make friends with consumers? Sure, computer prices have fallen 90% but damn if we’re going to sell any product of ours for less than $400 or £400, damn the conversion rate. You can buy a powerful computer for $2k now or you can almost buy Adobe’s Creative Suite. Add in dongles, phone activation and apps that call home (Adobe Reader, WTH?) – what else can we throw at consumers?

Finally, Adobe saw Flash as a chance to create an OS for the web so they wouldn’t have to do business with Apple or Microsoft … not sure how they can make money ignoring consumers but I’m sure Adobe is working on that (presumably the ad deliver feature in the new Flash).

In typical Adobe fashion, the first thing they added to Adobe Flash was DRM.

That is how they think. Here’s something that works. What can we do to roil the works?

Of course, Adobe is not exactly fast nor brain-smart so they can’t envision a world where Ajax (& others) are already eating into their dream of Flash as the internet OS.

How can this be?

And then Apple decides to ignore Flash.

Adobe throws a hissy fit but the reality is …

What is more likely to crash a browser page? HTML or Flash? 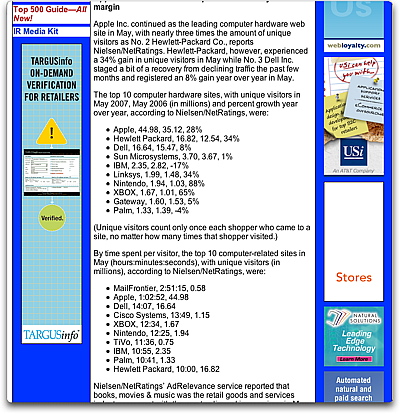 A typical “commercial” page on the web? How many elements are Flash advertising?

If we think AT&T’s EDGE is slow now, how much slower if we kept waiting for the looping FLASH ads? Hey, it’s like AOL 1998 again!

Flash, a thing so good most pages have to put a SKIP INTRO out so consumers don’t bolt?

Flash, with its constant updates with no visible improvements other than so Adobe get free branding when you arrive at a page that is blank except for a link & command to go to Adobe.com to get the latest Flash? (well, presuming you don’t think DRM or can’t-skip ads are an improvement to Flash?)

If Google converts everything on YouTube from Flash to H.264 and 10 million iPhone users simply ignore websites that insist you download Flash a year from now?

Is it then Flash in the pan? The beginning of the end? Like animated GIF’s – amusing in the infancy of the web but out of step & place?

Another strike against Flash might be that Apple doesn’t want to encourage any proprietary web “standard” that they don’t have a hand in – and perhaps particularly because it’s Adobe.

Microsoft of course, is already aiming at Flash with Silverlight.

Again, not exactly smart to tick off Apple AND Microsoft.

Web designers are going to still use Flash to prettify their animation but web programmers are not going to be enticed by Flash as a programming langauge – even or especially with DRM & ad delivery.

Flash may be just that – a bright light that shines ever so briefly by already dimming, in the words of Billy Ray Valentine, “You can hearing them panicking right now …”

Sadly though, this is 99% of the Flash out there …