For those outside the United States, we have a new shopping holiday – BLACK FRIDAY. The day after Thanksgiving … of course, now Thanksgiving is essentially a day of eating, napping and football watching … with virtually all stores other than grocery stores closed – 24 hours is just about all that most Americans can stand not only cooped up with family & relatives but the longest period of time without buying anything … so on the Friday after, people would literally burst from their homes to begin shopping for the Christmas/holiday season.

Being competitive, stores began opening earlier and earlier and now – we have stores that open at MIDNIGHT. Nary a second shall pass after Thanksgiving before we begin to BUY, BUY, BUY and of course, SELL, SELL, SELL. Yes, 5 AM is for pansy – we are now open at MIDNIGHT on FRIDAY so you can buy that thing that is not so great for $13.99 but now at $6.99, I am all over it like butter on Ali Larter (sorry, I wish I had an accompanying photo – just close your eyes).

What CARS items are on sale for Cyber Monday

This week, TRU has a special – if you buy the Piston Cup 500 Track playset (which comes with Lightning McQueen, Chick, Leak Less & King), you get the carrying case free.

There is a “booster” (two spinning discs) that sends the cars racing around the track. Seems like fun though apparently one should keep it away from the windows as it can just send the CARS flying off the track. 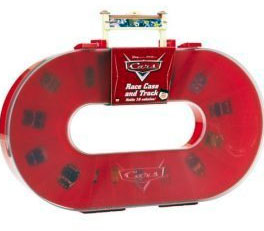 If you use Paypal, you can get up to $50 back for the new few days.

THE REST OF THESE DEALS HAVE EXPIRED – WILL UPDATE IF NEW MAJOR SALES APPEAR.

Okay, I might actually get to a Target by 10:00 AM, though I’m sure by then the shelves are stripped bare …

Not sure if the first item is the large Dinoco Heli & the large McQueen each $12.99? Closest KB is 30 miles away so I won’t be going but the Buy 1 Get 1 Video Game sale sounds pretty good. Don’t forget that some KB’s are closing – check the store locator link.

While the Kohl’s on the West Coast tend to be smaller and not much toy inventory, be sure and look if you’re still trying for Luigi’s – 50% is around $18 and whatever CARS singles and multi-packs they have.

Of course, this only covers the CARS items … so happy shopping!

OUR OTHER “CARS” POSTS:

If you want a recap of the Mattel Pixar CARS line from the beginning.

Unlike other toys/hot items that stay hot for a few weeks or months – this Mattel Pixar CARS diecast line has pretty been SIZZLING for 16 months – not just rare but almost un-heard of.

Of course, we would love to tell you that if you show up here at 7:00 AM, you are assured of seeing it on the shelve un-touched … or course, that is not really possible with this line due to real demand and eBay “re-distribution” demand but we have tried to sum up why it’s seems impossible and some buying tips that while not foolproof, might make things slightly easier …

Mattel Pixar Cars: I Want to Buy But Where?

First, one way to skip the driving around is to buy sealed cases, here is a brief rundown on what that is AND what are the CARS coming this holiday season (the last two months of 2007):

Or what the latest on the shelf cards & CARS look like?

If you wish to plot out what CAR will make its first appearance & in what box in 2008, a friend of 2aDay has thoughtfully provided a spreadsheet you can download or it’s also been added to our online checklist/spreadsheet.

For those on the intermediate & advanced stages of this obsession (yes, I has the fever! I has the fever 🙂 ) … you’ll want a “field guide” to spotting what’s what:

A Basic Checklist (in spreadsheet form)

Then of course, a more indepth guideline on how to collect them – just one of each? one of each available on a different card?

As you progress further, you might need or want a guide to understanding what do the three different designs on the front indicate and how complete of a collector you want to be:

Of course, by now, you’ll want to know everything and plan your budget carefully … Mattel will definitely release 35/36 of the Piston Cup Racers in one massive collector’s set but will they release them in smaller sets? Our speculation on why rioting is probably not necessary:

Mattel Pixar Cars: All the Piston Cup CARS-Speedway of the South Box Set

If you prefer to see some of the cardbacks in a larger file size or to view the two posters for a visual look at the CARS to collect, our FLICKER page is here.

Did you know the Blu-Ray DVD (for HDTV’s) will include a “name-spotter” feature that will let you see the names of 217 CARS within the movie?

And while we’re at it – pure speculation on our part as to what might be coming next?

While Frank the Combine on eBay seems enticing, you might want to know that he’s very small and all plastic but there are some other options …

Nothing very insightful about what’s coming but still good to know that CARS is bringing in money and everything is looking smooth.

Yes, more speculation & answers on our part but the stars and other things seem to be syncing up for a 2011 sequel: