First, there’s no such thing as buying ONE “Cars” CAR … If you have less than 50, you have done a remarkable job of self restraint.

Reader “AvgJoe” posed an interesting question for those starting out and hopefully this newbie guide will help you navigate what can be an overwhelming task when you’re just staring at the pegs.

What’s the difference between a CAR such as LIGHTNING McQUEEN when it’s offered on the individual cards, the multi-packs, the box sets or from a playset?

The 1:55 diecast line is mostly packed on individual cards but they’re also on multi-packs.

So, what’s the difference between the LIGHTNING McQUEEN’s on the cards above?

Okay, extra credit – how about this LIGHTNING McQUEEN?

Different than the others? Same?

Okay, you get the Launcher but otherwise, when it says LIGHTNING McQUEEN, you are safe to ignore its wrapping and surrounding. It is the same LIGHTNING McQUEEN that came out in April 2006 … now if it says DIRT TRACK McQUEEN or anything else, then it’s different.*

Now, they have released a SLEW of different LIGHTNING McQUEEN’s …

Can you name all the McQUEEN’s?

I just get the feeling we’re missing someone?

Ah, much better – and don’t call me purple!

So, if you’re just starting out, they can look similar from a distance but each package is labeled so if only want one LIGHTNING McQUEEN to open – the rest are just repeats – is it possible to not buy a repeat of any of the CARS (to get another one)? In theory, if you started with the box sets, you might be able to work out a matrix spreadsheet to minimize your buying of repeats but the problem is many of the box sets are in short supply since they never sold very well … though some stores have 40 of them still left so it could be worth a shot … and then supplement with multi-packs and finally, individual CARS but the question you have to ask yourself is – are you smarter than Mattel? Mattel is the guy on the street with the shiny dice and the 3-card monte tricks of shuffling CARS around – can you spot the CAR for $2.99 or the one for $13.99 (with two others you have?) … so, um, good luck with that.

There are also playsets but they do not contain any “limited edition” CARS. They are clearly a fun way to display your CARS … 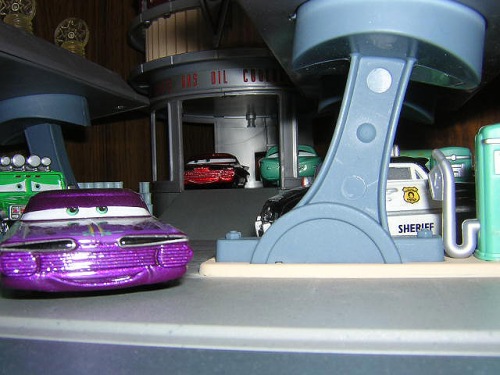 This is Flo’s Cafe – available only at TRU. It does NOT come with any CARS.

As for box sets,. here’s one at Sam’s Club during the holidays – now out of stock at out local SC.

More likely, you will see a set that looks more like this …

Frankly, most of the sets sell okay the first few weeks they are out but then tamper off dramatically – most people are just not that interested – so stock on the store shelves are hit or miss – some stores might have 20 and other stores do not have any.

As you can see from both box sets, they are almost always repeats of the individual cards & CARS except for a few exceptions which I’ll cover later.

The only CAR outside of the normal realm of store shelves is this one:

There is one mail-away CAR that is free (+ shipping) by buying the CARS Blu Ray DVD. This version of McQueen does NOT appear in the movie however. You can find more details from our post here – you should hurry – promotion ends on January 31, 2008.

(It’s the purple CAR on the right in the collection of McQUEEN’s).

The first question to ask is if you want one of every CAR released in the 1:55 scale line? And you just want one of each to open up and display …

If you answer, yes, as of today, you have approximately @86 CARS to complete your collection. You can get a real spreadsheet/checklist at our EDITGRID page. Look for the tab marked OPENER LIST.

There’s no one strategy that will work for everyone just starting out because everyone is different. If you want to spend the absolute least amount of money and you’re in no particular hurry – then start with the box sets, then the multi-packs and figure out what’s left to buy on the cards but as I said – many of the basic box sets are either hard to find or if you live or shop in the right area, perhaps – very easy so it’s hard to recommend that strategy as you might go to stores to see it over-flowing with gift packs, movie moments and individual cards and keep bypassing them in hoping to scoop up 6 CARS in one box set … and then curse my name … or conversely, you can buy LIGHTNING McQUEEN on an individual card and then suddenly spot the gift pack with the 3 CARS …

It’s a great way to get LIGHTNING RAMONE (available nowhere else) and FLO (only in another multi-pack) but in 1 quick step, you have an extra LIGHTNING McQUEEN … OR if you bought this other 3-pack Gift Pack …

“Is it possible to buy CARS without getting a repeat?”

In the words of Nelson from THE SIMPSONS, “That’s unmpossble!”

The following CARS have been issued and or re-released from day one. Just like the LIGHTNING McQUEEN’s shown above. You should not have much trouble finding them in stores ranging from the obvious big three of Wal-mart, TRU & Target but even in places like Walgreen’s and Long’s … they are nearly everywhere … re-released multiple times on cards, in multi-packs or box sets.

These are still relatively new, not shipped in many boxes or still very popular and are usually grabbed when someone sees them on the shelf. I expect that Dale Jr. will ALWAYS not be easy to find. The white rim FABULOUS HUDSON HORNET is unofficially the ONLY retired CAR so if you want the “incorrect” version (correct & current version with red rims), he’s not all that hard to find – some stores will have dozens of it but you might have to search a little harder since it’s been about a year since it was last released.

Some other people have brought up an interesting point – how long does Mattel have the license for a RED Dale Jr. #8 CAR? Is 2008 the last year and last time we’ll see the Pixar Dale Jr. #8? Is a “red car” trademarked and “trade-dressed” by DEI and or DEI & Budweiser? Though now DEI seems to have emptied their museum/store of Dale Jr’s red merchandise, does that technically mean they are “abandoning” it? Budweiser is now sponsoring the #9 Kasey Kahne car with what looks like essentially the same paint scheme though … so it will be interesting to see how this is all handled. It’s presumed most licensed-merchandise contracts are for a set period of time so it’ll be interesting to see what that period might be … so maybe the Dale Jr. CAR will be the next to be quietly retired (like the white rim FHH)?

These are the latest that are just out. I’m sure in a few weeks, they should as easy to find as the top list but as of this week, everyone will grab one or more as they see them.

There were 8 WM exclusives – 4 which are tougher to find. (One is now extremely easy CACTUS McQUEEN is bundled in a 3-pack and Blue/Ghostlight Ramone is on a card now). These are the easiest as they were not only re-stocked but Al Oft was included in the Sam’s Club box set and BOTH are coming as part of the GIFT PACKS down the line.

The 2nd 4 (included Charlie Checker but just released on a 3-pack so easy to find), were never re-stocked and thus are much harder to find. Your only bet is probably eBay though if you are willing to wait, all three will be re-released later this year.

Target Exclusive – You Have to Buy the Box

It’s on clearance in the next few weeks so now is the best time to pick it up. SURPRISE, it comes with LIGHTNING McQUEEN! Plus 6 other Piston Cup Racer CARS or which only THREE are NOT available anywhere else YET. Target at Amazon link.

OCTANE GAIN is also available as a Launcher in the next few weeks though you have a decision, which is a better deal? To buy the box set with 4 repeats to get 3 CARS not available elsewhere for the clearance price of $17.99 or OCTANE GAIN for $7.99?

NO STALL is coming in a Movie Moments pack in another month or so.

You Have to Buy the Box

The following two CARS are only available in boxed versions. This Mater never actually appears in the movie but was included in several previous box sets (BJ Warehouse 2006, the Rollin’ Bowling Mater game & the Mattel 2006 Factory Set – the game being the easiest to locate). Mack is not technically part of the line but the front cab portion (and only the front) is in scale to the other CARS so if you want Mack, you have to buy one of his playsets, many to choose from. 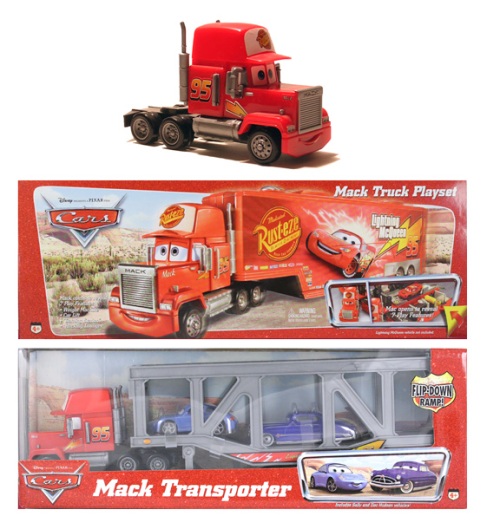 Recalled and still not re-released. You can only buy the older (non-recalled) Sarge’s on eBay – usually around $15. If you wait until summer, he’ll be back. 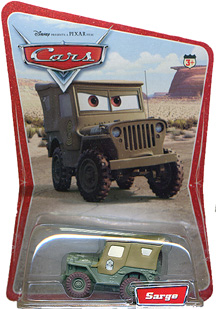 Limited to 15,000 Blu-Ray McQUEEN (not actually in the movie), the mail-away promotion has ended so now on eBay only.

In the toy world, slightly alterations (intentional or un-intentional) from the “norm” are called variants. It usually involves some paint or tampo decal change/error … if it’s one or two CARS, it’s merely called an error … if it’s a multi-exampled production run “mistake,” then it becomes a variant. With Mattel’s variants, they are easy to spot unlike some others so you can add these to your list even if you’re an “opener.”

Again, these are all very minor and may not be of interest to you but just listing it in case you care.

NOTE – Packaging variants are NOT listed here since that’s for people who saved them sealed. That is covered in our collecting post and the cardback post.

King – Desert Art card versions were made in Thailand (on bottom of back of card) and featured a slightly differently back wheel well. It is literally a 1mm difference (I measured) so not particularly exciting but in case it’s important to you. The color of the King’s are also slightly lighter.

Sally – Desert Art versions were made in Thailand (on bottom of back of card) feature tampo decals of the Porsche logo and the words Carerra that are a little less dark than the China versions.

Fabulous Hudson Hornet – the only “official” variant on a Supercharged card. He was issued incorrectly in white rims and changed to the correct red rims but neither his name nor the code number was changed, and unofficially, the white rimmed FABULOUS HUDSON HORNET is presumed to be retired and no longer available except with red rims. Note, for new collectors, DOC HUDSON is CORRECTLY available in both versions, in white as DOC HUDSON and in red as DIRT TRACK HUDSON HORNET.

Fred – Available with and without a front license plate that reads FRED.

Charlie Checker – the WM exclusive version has red tail-lights. The current one in the GIFT PACK has yellow tail-lights and so does the WOC single version.

All our other CARS posts can be found here.

19 responses to “Mattel Disney Pixar Cars Checklist: I Just Bought One, Now, What?”