Opening May 22, 2008, the long awaited return of Indiana Jones. Hard to believe it’s almost 20 years since the last one … at least they haven’t tried to simply pawn off the Indy character as just a few years after the LAST CRUSADE but that it’s “real time.” THE KINGDOM OF THE CRYSTAL SKULL is set in 1957, @19 years after the 1938 setting of THE LAST CRUSADE.

And unlike the first go-around, they are loaded for bear with toys this time.

For some odd reason, perhaps because the first release of action figures for Indiana Jones around 1982 did not sell that well, the two sequels never featured much of anything in the way of action figures. Presumably, also that the TEMPLE OF DOOM was not exactly kid friendly or all that compelling action figure-wise (hey look, it’s the variant box set of the Indian slave kids!) and of course, the LAST CRUSADE was Nazi’s and biblical – one controversial and one polarizing.

Though conversely, because they were not that popular, if you have a complete set mint-on-card, it’s worth thousands … especially the mail-away Belloq …

There was a release not long ago that was available at the Disney Resorts that again did not look very much like Indy & also not very complete in regards to the number of figures: 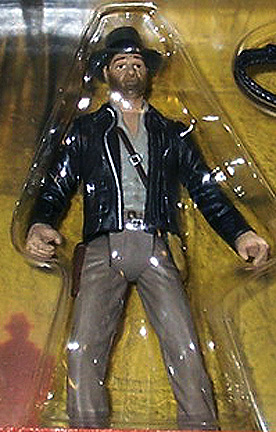 Um, does anyone know what Harrison Ford actually looks like?

So, for the new release, Hasbro is making up for lost time & sales …

I’m sure there will be over 1,000 products tied into the release but we’ll just concentrate on the actual action figures. There are three main groupings.

The Hasbro 3/4″ line
The Hasbro 12″ line
& the others from Sideshow, Medicom and Takara.

Also note, some descriptions of characters & accessories might be SPOILERS so if you’re the type who can’t forget anything … you might not want to know … though the statute of limitations has run on some spoilers (Sean Connery is his father 🙂 ). 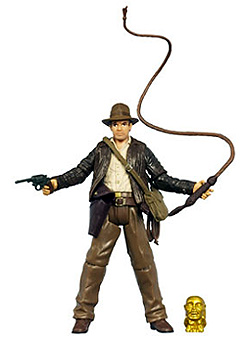 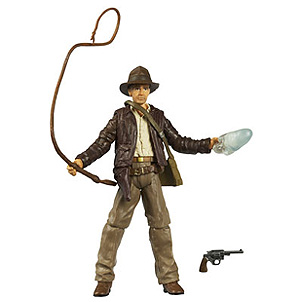 In order: Indy & Idol, Indy in Cairo Square, Indy from Castle Grunwald & from the new film – Indy & Rocket launcher (not from Raiders) and Indy & Crystal Skull.

Each sold separately, of course.

Some look like Harrison, some look his stunt double … but it’s a nice price and all with accessories – of course, the Ark is the best accessory.

Of course, you get other figures from the 4 movies … as noted, they are not kidding around this time … you get 21 others to choose from, that’s right, 21.

(these are lower res – and @3 3/4″ figures like Indy above, I figured you had a pretty good idea of what they look like as you’re not likely to get them without Indy … or in the case of the the new film, you’ll either grab them or you won’t).

NOTE – They are NOT three packs, to save space, I placed them together – they are all sold separately.

Two chances to get the Grail cup! I don’t remember Vogel with an ax but okay … 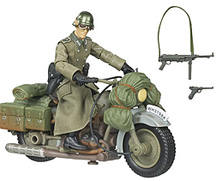 There’s three two-fer sets: with Marian (a sword, a frying pan and monkey accessory!) & Cairo Henchman; German soldier with motorcycle and; a separate set of German soldiers (not photoed).

Indy has his own deluxe blisters … 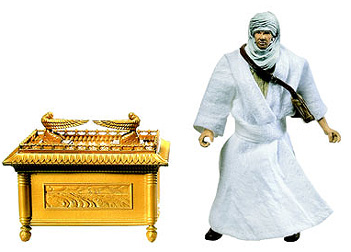 For the truck chase, see next section … 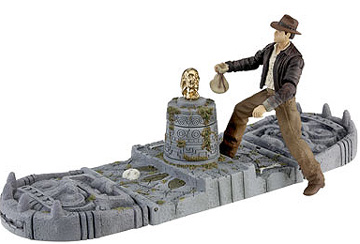 Both sides left up (the trap). 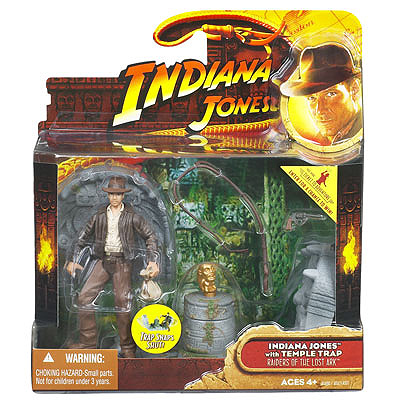 Here’s what the blister cards look like for the deluxe versions.

And the truck for Indy to chase down on the horse … 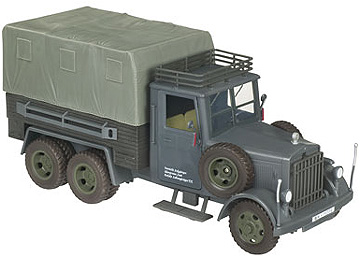 The troop car that gives chase …

And from the new movie … 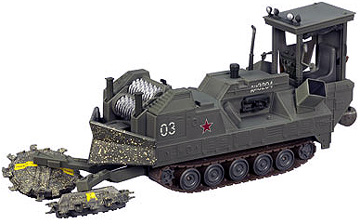 And the mega Lost Temple of Akator Playset

Oh, one last thing – buy 6 of the BASIC figures, mail in stickers inside the packaging + $5.99 and get a Crystal Skeleton mail-away figure. 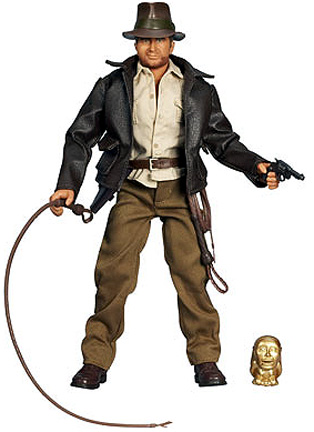 As Hasbro says, “Embark on your own thrilling adventures with this Indiana Jones action figure that says fun Indy phrases, like “Trust me.” “Snakes…why’d it have to be snakes!” and “I hate these guys!” A 16-inch whip fits in Indy’s hand, while an additional whip stays coiled. A removable pistol fits in Indy’s holster and he also comes with a golden idol.

He actually has 11 phrases! I won’t spoil it for you … though shouldn’t he also say, “Why does this sculpt look more like Steve Spielberg?” Part of the reason is the mouth actually moves so they had to make his face rounder … I also hope it’s actually Harrison’s voice and not some random guy. 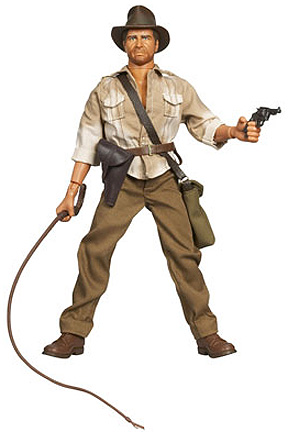 This sculpt actually looks much more like Harrison though it’s less interesting of a figure, if you hold his hand/arm above his head and press the button on his back, he can whip his arm forward and you get a whipping SFX. THe shirt and outfits looks pretty good though.

They don’t seem to have many additional sound features but still, overall – a nice price at $19.99 – most other 12″ figures have straosphered from $30 minimum to a couple hundred dollars.

“Four (4) Ark stickers inside retail packages of Indiana Jones 12″ figure products to receive the 12″ Ark of the Covenant. Each package contains one sticker. Stickers must be from 12″ figure products. No other stickers will be accepted for this offer.”

It shall be four. Not three. Not five. Four is the number. And if thy tries to use 3 3/4″ inch figure stickers, when thoust opens the ark, thou might suffer the same fate as waxy Nazi’s … you have been warned.

Info is included with each figure … if you’re buying the 12″ deal … make sure both sides are properly sealed as thieves might steathly cut open packages just to get the stickers … action figure redemption thieves are no better than tomb robbers. A thousand year plague on their mobile homes! 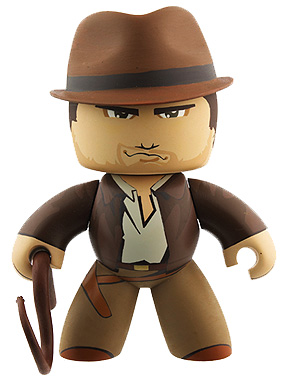 Of course, you want the Mighty Muggs (covered in this post here, scroll down)

While not part of Hasbro, Lego has a whole slew of cool Indiana Jones sets and figures (also wallpaper and movie downloads!)

Or how about taking your own (Expedia) Indiana Jones adventures (only without people trying to shoot you with poison arrows, snakes by the bushel-full and a monkey for a tour guide … but hey, maybe it’s just me …)

And of course, if you need to revisit the three movies, there is a new box set 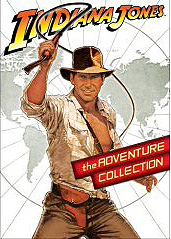 FROM THE PRESS RELEASE:

Indiana Jones and the Raiders of the Lost Ark Special Edition DVD is presented in widescreen enhanced for 16:9 TVs with Dolby Digital English 5.1 Surround, French 2.0 Surround and Spanish 2.0 Surround and English, French and Spanish subtitles. The disc includes the following special features:

— “Raiders of the Lost Ark”: An Introduction by Steven Spielberg & George Lucas
— Indiana Jones: An Appreciation–The cast and crew of “Indiana Jones and the Kingdom of the Crystal Skull” pay tribute to the original trilogy.
— The Melting Face–A recreation of the amazing physical effect of the villain’s melting face in “Raiders of the Lost Ark,” including Steven Spielberg and George Lucas commenting on the evolution of visual effects and CGI.
— Storyboard Sequence–The Well of Souls
— Galleries
— Illustrations & Props
— Production Photographs & Portraits
— Effects/ILM
— Marketing
— “LEGO Indiana Jones: The Original Adventures” Game Demo and Trailer