Looks like Target has a new exclusive for Easter and it’s ACTUALLY an exclusive! … Yes, no more crappy re-packagings and it’s even reasonably priced (last year’s mock ornament was almost 80% more than regular pricing for what? A 1-dimensional hanging cardboard circle they called an ornament? …) 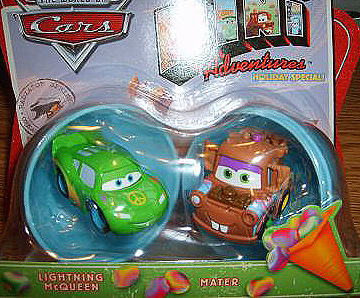 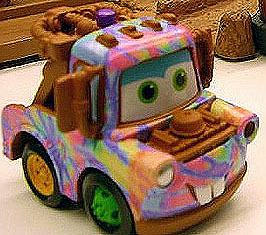 Thanks to reader “Sarah”, she says the other two are: 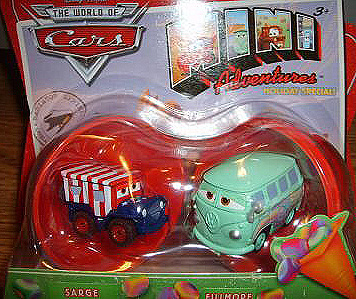 Completists might note, reader “Kdippong22” notes that the Ramone/Flo set & the LM/Mater set come with BLUE or GREEN eggs but that the Sarge set only appears with a RED egg but perhaps time will tell if you find the Sarge set in different colors eggs.

UPDATE: Now, we’re not so sure LM or Flo comes in BOTH colors. I have visited 4 Target’s and where they have them displayed, I have only see the three packages in the three eggs as show in the photo above … and I looked about 10 sets selling on eBay and they all match so we’re waiting on photographic proof so for the time being, don’t drive yourself crazy trying to find them – they might be a rare error set … and until we turn up a batch for them, it’s just an error – amusing and interesting but otherwise, not consider a color variant.

UPDATE #2: Well, they’re pretty real to reader, Kdippong22 who was kind enough to snap a few pics for us …

He loaded the other pics online – links in the comments, thanks Kdippong22.

Or you can pretend to be a spy and try and decipher my low res blurry photo … okay, here’s the number below and reader John recommends calling and having them set them aside for you. Here’s the Target store locator webpage.

And these don’t appear to be on the regular schedule of Mini’s coming out … so finally, an exclusive that’s really an exclusive … though, of course – not the 1:55 scale CARS.

And resistance is futile …